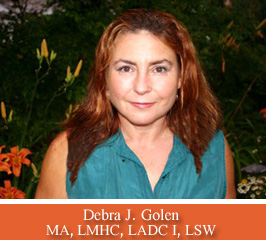 Debra Golen has been in the mental health field for 20 years after earning her Master's degree in Clinical Psychology. Her Master's Thesis was presented at the Eastern Psychological Conference. The focus of Deb's thesis studied the differences in personalities between children raised in alcoholic homes (ACoAs) and those raised in dysfunctional families. Few differences were found as the negative affects on the young adults studied were apparently due to the amount of conflict in the family, and the lack of open communication between parents and children. This resulted in the honor of her being accepted as an Associate Member of Sigma Xi Research Society.

Her post-graduate training included Family Therapy and remains an area of Debra's specialization. Certification in Eye Movement Desensitization and Reprocessing, (EMDR), a very effective technique used with trauma survivors, was also obtained. An active member of the Greater New Bedford Trauma Response Team for more than a decade, Debra has completed the training taught by the National Organization of Victim Assistance.

Debra's prior experience includes work in Community Residential Programs for disabled children. Currently, she is a court-appointed guardian and monitors medications for several individuals deemed unable to care for themselves. Acting as a Guardian ad Litem performing court ordered investigations regarding the best placement for minor children is also a sideline Deb enjoys. She is also a Diplomat in Clinical Forensic Counseling and belongs to the Massachusetts Association of Mental Health Counselors. 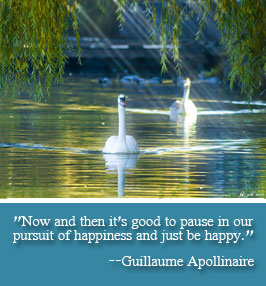 She has also provided mental health treatment in long tem care facilities and has found that information she learned while becoming a Medical Assistant, as well as her in-patient experience, has proven invaluable when coordinating care with the medical professionals in the community. “Elders, especially, often have multiple medical conditions and may be taking a variety of medications that can have a profound affect on their mental condition. These medications can cause symptoms of anxiety, depression, and even disorientation, which often can be resolved by working with their physicians' to change or modify their medications, or suggest that previously undiagnosed conditions be explored.” “Diagnosing dementia vs. depression in the Geriatric population can be difficult for most medical professionals who don't have the time, or tools, to perform the psychological tests that can help differentiate between the two. Even though it is not widely publicized, the geriatric population suffer from depression, and attempt suicide, more often than most other demographic groups.” Aside from her years of experience working with the geriatric population, Deb helped establish the normal scores, or values, in the Cognitive Skills Workbook, written by Lynn Carter, PhD and Donald Corriveau, PhD, by testing normally aging Elderhostelers on the UMass Dartmouth campus.

Deb Golen believes that volunteering in the community is an important part in obtaining a "feeling of belonging" that we all need. She is a member of Give an Hour, an organization that provides free of charge counseling to veterans returning to the community. Deb also is a volunteer for the Lloyd Center for Environmental Studies, and the Coalition for Buzzards Bay. She is involved in fund raising for numerous non-profit organizations including the Greater New Bedford Women's Center, American Cancer Association, Breast Cancer Awareness Program, Alzheimer's and Diabetes Associations, and Make A Wish Foundation to name a few. Deb has worked at nearly all the areas events including the Scallop Festival, New Bedford Summer Fest, the Alzheimer's Walk, Fall River Celebrates America, the Society for Human Advancement through Rehabilitation Engineerings (SHARE) walk, and the Domestic Violence runs. She is part of a very active Community group, the Nautical Whalers, which has adopted and regularly cleans New Bedford's East Beach. 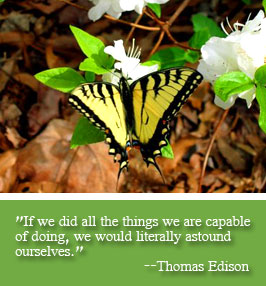 The achievements she is proudest of are; her successful swim across Buzzard's Bay last year, her involvement in Boy Scouting resulting in her becoming a Co-Advisor for Venture Crew members, and being part of the Security and Safety Patrols for the Sports Car Club of America, at which she and her husband, Richard, won the New England and Mid-Atlantic Road Rally Championship several years ago. She is a past President, and multiple champion, of the Quequechan Sports Car Club and successfully lobbied to eliminate the “Ladies Class” due to strong beliefs that “in many ways, women can compete with men, and often win, if they are encouraged and supported. Clearly, most women do not have the upper body strength that men do simply as a result of less testosterone, but in most cases, women just need to have the courage to overcome their fears and challenge their own stereotypical beliefs regarding gender.” She also provided Security Services at the recent Cape Cod Parrot Head Convention which drew participants from the East Coast and surrounding states. “Once I convinced the organization that pairing women and men on Security Details, as they do in Europe, is more effective in peacefully resolving conflicts, they decided to try it. Despite the amount of alcohol being consumed and the party atmosphere, there were no injuries or physical fights as potential issues were dealt with calmly before they escalated, without threats or intimidation, only effective communication.”